The aged Rav Avira, and the great Rebbi

A curious incident is related on Chullin 51a, in which Rav Avira appears. This Rav Avira is a scholar from Israel. Rav Safra informs Abaye that this scholar has related an incident and novel teaching from Rabbi (/Rabbi Rabba). Abaye pursues Rav Avira to a rooftop and eventually gets him to relate the novel ruling. Then:


Rav Avira said to him : I am a director of assemblies in the study hall. I was standing above the Great Rabbi Yehuda HaNasi, and Rav Huna of Tzippori and Rabbi Yosei of Medea were sitting before him, and a needle came before Rabbi Yehuda HaNasi that was found in the thickness of the reticulum protruding from one side, i. e. , the inside, and Rabbi Yehuda HaNasiturned the reticulum over and found a drop of blood on the outside, parallel to the wound on the inside, and he deemed the animala tereifa. And he said : If there is no wound on the outside there as well, from where is this drop of blood? Abaye said to Rav Avira : He caused that man trouble needlessly, i. e. , you troubled me for no reason. This is nothing more than the mishna, which states that an animal is a tereifa if the omasum or the reticulum was perforated to the outside.

Artscroll has a nice footnote discussing the identity of  this "Rabbi" that Rav Avina quotes. Was it really Rabbi Yehuda HaNasi? Footnote 11:

This is a reference to R' Yehudah HaNasi (Rashi d.h. le'eila miRabbi Rabbi; see though, note 14 below).

[As mentioned above (note 11), Rashi understands this as a reference to R' Yehudah HaNasi, redactor of the Mishnah. It seems strange, though, that Abaye, who lived several generations after Rebbi, should have conversed with a contemporary of Rabbi. Moreover, this contemporary is described here as a tzurba reirabbanan, which is generally understood to mean a young Torah scholar (see Rashi to Taanis 4a, d.h. tzurba reibarabbanan). A contemporary of Rebbi could not have been "young" when conversing with Abaye! Indeed, because of such considerations, the Sefer HaYochasin (cited in Seder HaDoros רב עוירא) disagrees with Rashi, and explains that Rabbi Rabba here does not refer to Rebbi, but rather means "the great one of the generation." Seder HaDorors, however, allows that it might refer to Rebbi, and that Rav Avira lived exceptionally long and was indeed quite old when he spoke with Abaye.] 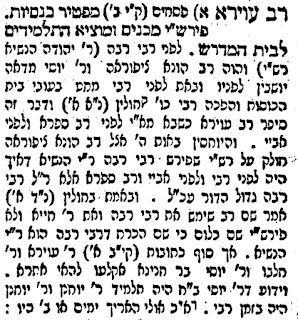 After citing the relevant gemara and the Rashi, he cites Sefer Yochasin, on the letter Heh, for Rav Huna of Tzippori, noting that


he argues on Rashi who had explained that "Rebbi Rabba" was Rabbi Yehuda HaNasi, for how could he before Rabbi as well as before Abaye and Rav Safra. Rather, Rebbi Rabba implies the Gadol HaDor.

Yet, in Chullin (54a) it states that Rav attended to Rabbi Rabba and Rabbi Chiyya, and Rashi does not comment there anything, for there it is utterly clear that Rabbi Rabba is Rabbi Yehuda HaNasi. Yet, at the end of Ketubot (112a), Rav Avira, Rabbi Chelbo, and Rabbi Yose bar Chanina visit that place, and it is known that Rabbi Yose bar Chanina was a student of Rabbi Yochanan, and Rabbi Yochanan was in the time of Rabbi. If so, perhaps he was long-lived, or there were two people by that name.

So ends Seder HaDoros. In Sefer Yuchsin, the discussion is actually a bit more extensive that the quote given above. He writes:

After suggesting that it refers to the Gadol HaDor, he notes that in the last perek of Rosh Hashana, it is apparent that he, meaning Rav Huna Tziporaah, is a student of Rabbi Yochanan.

I did a quick search, and we find this in the Rif citing a Yerushalmi,

It makes a lot more sense that Rabbi Rabba, the great Rabbi, is an appellation for whichever the current great of the generation is. Furthermore, in Eretz Yisrael in particular, the one to see about tereifot was specifically Rabbi Yochanan.

This is further established based on what Seder HaDoros mentioned, that Rabbi Yose ben Chanina accompanied Rav Avira, and the former was a student of Rabbi Yochanan.

If Rav Avira stood before Rabbi Yehuda HaNasi, let us say that it is in 217. Abaye might be at least 20 years old at the time of this incident, so 298 CE. A subtraction, 298 - 217 = 81. Not exactly a tzurba meiRabbanan if that means a youth. And we might want the incident with Rebbi to be earlier than his final year, and the incident with Abaye -- who Rav Safra calls Mar, meaning master -- to be older than 20.

Still, 80 to 100 years is not crazily old. It might make a lot of sense for Abaye to pursue a teaching from an elderly Sage about a novel position of Rabbi Yehuda HaNasi, because this is indeed a once-in-a-lifetime opportunity. And the statement that this is the same as the Mishna has greater resonance if it indeed Rabbi Yehuda HaNasi, redactor of the Mishna, who said it.

Yet the Rav Huna Tziporaah seems to be a much better grounding, as a student of Rabbi Yochanan. If we make Rebbi Rabbi into Rabbi Yochanan, who was born 180 CE and died in 279 CE, and have Abaye as a 20 year old, then 298 - 279 = 19 years, in which case calling him a youth ("tzurba meirabbanan") makes good sense, and even if we add a few year at the beginning and end, it makes very good sense.
at January 19, 2019