Focus on an Amora: Resh Lakish

What kind of information would we like on his bio page?

Ideally, attach attribution to each factoid.

Birthplace: Bostra, east of the Jordan (based on JE link, citing Grätz, Gesch. 3d ed., iv. 240;) There are several places by this name, but it would seem to be this one:  https://www.britannica.com/place/Bostra
Primary dwelling: Sepphoris: https://en.wikipedia.org/wiki/Sepphoris

Teacher: Bar Kappara
basis: he transmits many sayings in his name
According to: Bacher: ("Ag. Pal. Amor." i. 340)

Positions:
1) In Sephoris, alongside Rabbi Yochanan and Rabbi Chanina ("Simeon b. Laḳish stood on an equality with him and enjoyed equal rights as a member of the school and council")
2) Next, When R. Johanan went to Tiberias and founded an academy there, Simeon accompanied him and took the second position in the school

Rabbi Yochanan moved and founded the academy at Tiberias at some point before Rabbi Chanina's death in 250, so we might take this as a fuzzy boundary from position 1 to position 2.

City: According to Rabbi Reuven Margolias, it was Lakish

To be continued...
Interactions...

Some excellent Talmud projects out there

Aside from Mi Vami, there are several other excellent Talmud-oriented projects out there. I present here a short survey of these projects and their strengths. First, of sites presenting the Talmud. I'll update this list on occasion, but here is a first pass.

1) E-daf has been around for quite a while. It contains the tzurat hadaf - the image of the page - for the entire Talmud, as small images, large images, and occasionally menukad (=vocalized) images. It is aligned to Daf Yomi (a course of study in which people worldwide study the same page and complete the Talmud in seven years), so that the day's page is what automatically loads. A very simple, straightforward interface. The resources are graphics, rather than text that is easily processed, but the tzura is important.

2) Daf Yomi Advancement Forum - Kollel Iyun HaDaf - has many English resources for understanding each page of Talmud. The two I would deem most valuable, from an NLP / machine learning perspective, are Background to the Daf and Point by Point Summary. Background to the Daf has text such as this:


16)[line 1]ביאת אורוBI'AS ORO- (a) daybreak on the following morning (RASHI); (b) the beginning of sunset (TOSFOS)
17)[line 1]טהר גבראTAHER GAVRA- (a) the person becomes Tahor after offering his Korbanos (RASHI); (b) the person becomes Tahor since the required time has passed (TOSFOS)
18)[line 3]איערב שמשאI'AREV SHIMSHA- the sun is set
19)[line 4]אדכי יומאIDKEI YOMA- the sun (lit. day) has gone completely (RASHI)
20)[line 4]מערבאMA'ARAVA- Eretz Yisrael (lit. in the west [of Bavel])
21)[line 14]עומד ליפטרOMED LI'PATER- he gets up to go [away from the table, after his meal]

In which "difficult" words and phrases are explained. The line number is the line (in the tzurat hadaf) in which the phrase appears, then the phrase in consonantal Hebrew, then a transliteration to English, and then a brief gloss.

The Point by Point Outline has a goal of explaining the shakla vetarya (=give and take, discourse) of the page, and contains text such as this:

THE TIME FOR SAYING KERI'AS SHEMA
(a)
(Mishnah) Question: When do we say Keri'as Shema at night?
(b)
Answer #1 (R. Eliezer): The Mitzvah is from the time at which Kohanim may eat Terumah until the end of the first Mishmar (these will be explained).
(c)
Answer #2 (Chachamim): The time extends until midnight.
(d)
Answer #3 (R. Gamliel): The time extends until dawn.
(e)
A case occurred: R. Gamliel's sons came home from a wedding after midnight (they had not said Shema).
1.
R. Gamliel: You are obligated to say it now;
2.
In fact, wherever Chachamim said "until midnight," the Mitzvah (mid'Oraisa) is until dawn:
i.
Chelev (of Korbanos) and limbs (of an Olah) may be burned on the Mizbe'ach until dawn;
ii.
Any Korban that may be eaten for one day and a night is permitted until dawn.
3.
Question: If so, why did Chachamim say, "until midnight"?
4.
Answer: This is to distance people from transgression (lest dawn arrive before one performs the Mitzvah).

This might be useful for computing, or else training a discourse model. A similarly promising resource is their Point by Point Summary of Tosafot.

3) The Mercava is an impressive site. They have the tzurat hadaf, so the user is comfortable with the page. One can click on any phrase in the Mishna, Talmud, Rashi, or Tosafot and see an (aligned) English explanation of the phrase, in context. They have also marked up / color coded the discourse, for Statement, Proof, Attack, Defense, Question, and Answer. In this way, their functionality is quite similar to the Artscroll app. 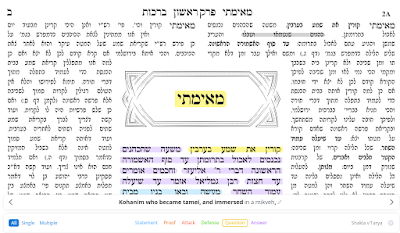 4) Sefaria is another impressive site, whose goal is to create an open-source digital Jewish library. Their code and texts are freely accessible / downloadable. (I use their resources extensively, in the form of a MongoDB dump.) They present the Talmud in its Hebrew/Aramaic aligned with the Koren's English translation. Each "statement" has a unique id and can be linked from the outside. They have numerous commentaries which have been aligned with the text, and so one can click on a statement and see, on the side, what that commentator says. They do not present the tzurat hadaf, which would be difficult given the format and desire to present arbitrary commentaries. They recently added punctuation to the first two tractates, and with the help of Dicta,

5) Al HaTorah has, among its projects, its Shas Gadol. Here is a sample page: 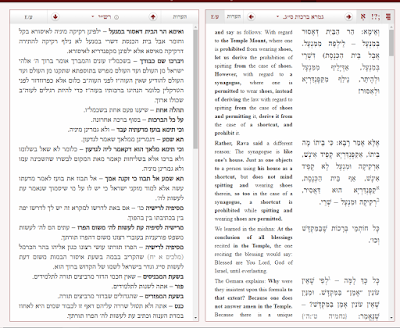 They allow you to customize your daf (just as they do for the Mikraot Gedolot) with the commentators you want. They also have punctuation and vocalization.

6) HebrewBooks has a Shas. For each page, there is a tzurat hadaf via PDF taken from the Neharda Talmud (Vagshal / Moznayim), which is beautiful and resource rich. The text is selectable, but the glyphs don't seem to correspond to Unicode Hebrew text so that is difficult. There is also a Text tab which gives the gemara, Rashi and Tosafot in a simplified form. They have a few meforshim aligned, and clicking on them will load the PDF of that page in the aligned sefer.