In today's daf yomi, Arakhin 4, we see the following conversation:


דתנן אמר רבי יהודה העיד בן בוכרי ביבנה כל כהן ששוקל אינו חוטא
As we learned in a mishna ( Shekalim 1: 4) that Rabbi Yehuda said that ben Bukhri testified before the Sages in Yavne: Any priest who contributes the half- shekel for communal offerings is not considered a sinner, despite the fact that he is not obligated to contribute.
אמר לו רבן יוחנן בן זכאי לא כן אלא כל כהן שאינו שוקל חוטא אלא שהכהנים דורשין מקרא זה לעצמן וכל מנחת כהן כליל תהיה לא תאכל
Rabbi Yehuda added that Rabban Yoḥanan ben Zakkai said to ben Bukhri: That is not the case; rather, any priest who does not contribute his half- shekel is considered a sinner, as they are obligated in this mitzva like all other Jews. But with regard to the priests who do not contribute the half-shekel, in order to excuse themselves from the mitzva they interpret this verse to their ownadvantage:“ And every meal offering of the priest shall be wholly made to smoke; it shall not be eaten” (Leviticus 6:16).


Who is לו in the phrase אמר לו רבן יוחנן בן זכאי? The two possibilities are:

a) Rabbi Yehuda
b) Ben Buchri

Koren, and therefore Sefaria, get this right. The English translation makes it clear that this second statement is a continued speech by Rabbi Yehuda, and that Rabban Yochanan ben Zakkai's reaction to is ben Buchri himself.

Artscroll, meanwhile, has it as "Rabban Yoḥanan ben Zakkai said to [Rabbi Yehuda]." This seems unlikely.
at June 20, 2019 No comments:

Arakhin 2b: Who does Yochanan ben Dahavai cite?

Today, in Daf Yomi, we started Arakhin. In the beginning of Arakhin, the Stam goes through various Mishnayot, asking each time the purpose of the inclusive language of HaKol. On Arakhin 2b, we encounter the following:


לאיתויי סומא באחת מעיניו ודלא כי האי תנא
The Gemara answers: It serves to add one who is blind in one of his eyes, and teaches that he is obligated to appear in the Temple, whereas one who is entirely blind is exempt. The Gemara notes: And this ruling is not in accordance with the opinion of this tanna, Rabbi Yehuda.
דתניא יוחנן בן דהבאי אומר משום רבי יהודה סומא באחת מעיניו פטור מן הראייה שנאמר יראה יראה כדרך שבא לראות כך בא ליראות מה לראות בשתי עיניו אף ליראות בשתי עיניו
As it is taught in a baraita that Yoḥanan ben Dahavai says in the name of Rabbi Yehuda: One who is blind in one of his eyes is exempt from the mitzva of appearance, as it is stated:“ Three times in the year all your males shall appear [yera’eh] before the Lord God” (Exodus 23:17). According to the way in which the verse is written, without vocalization, it can be read as yireh, meaning: Shall see, instead of yera’eh, meaning:Shall appear. This teaches that in the same manner that one comes to see, so he comes to appear, i. e., to be seen: Just as the usual way to see is with both of one’s eyes, so too, the obligation to appear applies only to one who comes with the sight of both his eyes. This is one possible explanation for what is added by the general statement of the mishna in Ḥagiga 2a, according to Ravina.

Meanwhile, Rabbi Yochanan ben Dahavai, at least according to my biographical data (e.g. Who's Who In The Talmud), is a student of Yehuda ben Tema, a 4th generation Tanna: 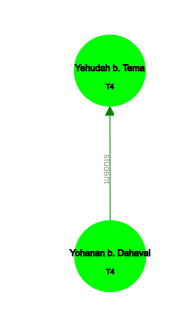 .
If so, the easiest to do would be to add the patronymic "ben Tema", and to assume that the absence is due to scribal error akin to dittography. Repeatedly in the sections above, certain positions were taken to be not that of Rabbi Yehuda, and there, the reference was to Rabbi Yehuda beRabbi Ilai. It is understandable, then, for the "ben Tema" to be accidentally dropped here.

Looking at the parallel text in Sanhedrin 2a, it appears that they do have Ben Tema:

It is difficult to say that occurrences in Chagiga, Arakhin, in Yerushalmi, and in the source Tosefta that they are citing all made the same error. Maybe it is just OK to leave out the patronymic, and people would have understood based on context which Rabbi Yehuda was intended; and only Sanhedrin added it.

This, of course, operates under the assumption that my biographical data is correct.

Now, looking at Toledot Tannaim vaAmoraim, volume 2, page 547, I see that he has a discussion: 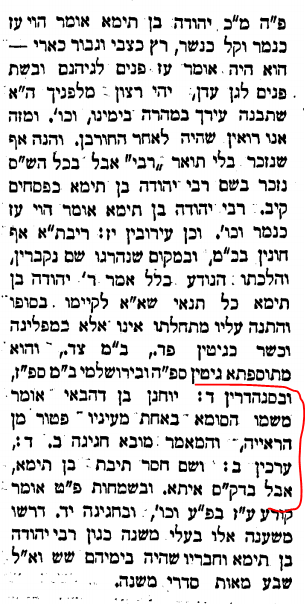 He mentions that, though in our printed texts in Arakhin we lack it, the patronymic ben Tama does appear in Dikdukei Soferim.
at June 18, 2019 No comments: